We were out for a drive July 28 and as we descended down to Oilver from the road to Mt. Baldy we saw a hazy overlay to the valley. Over on the far right you can see the smoke from the White Lake fire. That's quite close to the Dominion National Radio Observatory.

To see the zoomified image in a new page click here

Once we noticed the smoke we decided to try and find the fire. Eventually we got to an intersection that was blocked by an RCMP cruiser. So I took a picture of the smoky sky from that point. Later on I was looking at the picture on the computer and saw a speck. On my new expensive Panasonic/Leica lens ... but when I checked I found it was not dirt but something else. 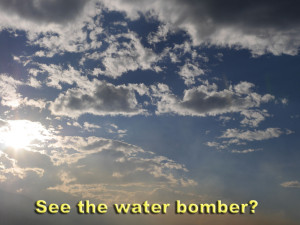